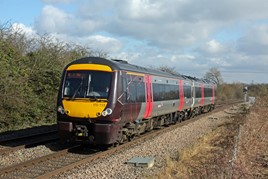 The West Midlands franchise could be expanded to include services currently operated by CrossCountry between Birmingham New Street and Nottingham, Derby and Leicester.

That is the intention of West Midlands Rail’s Interim Executive Director Malcolm Holmes, who will formally put his proposals to the Department for Transport once the public consultation for the next CrossCountry franchise opens later this year.

Under the current XC franchise, which is due to end in October 2019, there are two trains per hour between Birmingham and Nottingham via Derby, one of which starts from Cardiff.

XC also operates 2tph between Birmingham and Leicester, with one continuing on to Stansted Airport.

According to Holmes, these key commuter flows would be better served by the West Midlands franchise, where authority has been partly devolved to local government.

West Midlands Trains (WMT) took over the running of the franchise from London Midland on December 10. It operates under two separate brands - London Northwestern and West Midlands Railway.

For the latter, WMT is jointly accountable to the DfT and West Midlands Rail (WMR, a partnership of 16 local authorities), with the expectation that full franchising authority will be granted to WMR when the franchise is re-let in March 2026.

The current franchise is expected to deliver more than £1 billion worth of improvements, including increased services frequencies and new and refurbished rolling stock that will provide 20,000 extra seats for rush hour passengers into Birmingham (RAIL 841).