EXCLUSIVE: Transport for London “hours from stopping the Underground and buses” 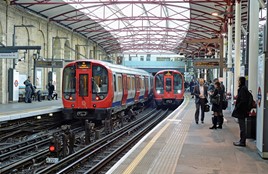 former London Transport Commissioner Mike Brown has admitted he came close to closing the network and that the city’s transport system is “starving” for money.

“The rest of the national industry, the private operators, got whatever they needed to keep going. Meanwhile, we are sitting here starving,” he told RAIL In an exclusive interview.

“Let’s not beat about the bush. We are absolutely living hand to mouth now on TfL.”

Brown stepped down on July 10, with the capital still struggling to cope with the impact of the Coronavirus pandemic.

He revealed just how close to the brink the capital’s network came this spring, before central Government threw a £1.5 billion financial lifeline (RAIL 906).

“We have a deal that stopped me pulling the plug on services. But only just. I was hours from having to stop the Underground and buses from running in this, the greatest city on Earth. How insane is that? How could that even be allowed to happen?

“I waited until five to midnight on the day when I would have had to pull the plug for the next day, before I got the letter from Government on an interim funding settlement.”

He added: “This isn’t a party-political point, but it really does need a fresh look at how this dynamic between a devolved city such as London operates in the context of a national Government.”