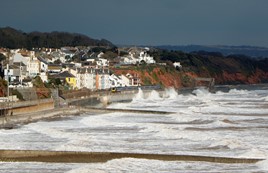 The Sea Wall between Dawlish Warren and Teignmouth could be extended into the English Channel, with the railway re-aligned, if ambitious Network Rail plans are approved.

Speaking exclusively to RAIL, NR Director, Route Asset Management (Western) Mike Gallop said the biggest problem facing the wall comes from the adjacent cliffs, and that this project was the best solution to combating the problem.

By extending the sea wall, NR would create space whereby any cliff subsidence and collapse would not affect the railway.

“The options are going out onto the beach and moving the railway further away from the cliff. Sprey Point would be the edge of the wall and we could have rock armour, too,” Gallop told RAIL.

Gallop said that another affected area is between Kennaway Tunnel and Dawlish, and here NR plans to “effectively build a new wall. It will have a higher beach wall and a wave return. This will be modern engineering.”

A third element to the scheme is what NR calls Cliff Behavioural Unit 17. “It is Horse Cove, and that needs an avalanche shelter-style structure. There is substantial rock bolting and cliff stabilisation also needed here,” explained Gallop.