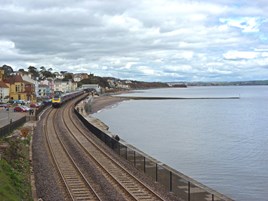 In an exclusive interview with RAIL, Langman said that NR does not have a preferred plan at the moment for defending the line from bad weather and the effects of climate change, but that it would be sufficiently protected to “remain there in our lifetimes”.

His comments come more than nine months since NR published its Exeter to Newton Abbot Geo-Environment Resilience Study Executive Summary for Winter 2016-17 (RAIL 815), which offered five coastal defence options and six geo-technical options that are designed to prevent any re-occurrence of the infamous sea wall failure in February 2014. The line was closed for two months for repairs.

Increased resilience is also needed to mitigate the risks posed by a projected sea level rise of up to 55cm by 2065.

Coastal defence options include extending the sea wall further out to sea, raising the height of the sea wall, and using beach management techniques such as groynes and offshore breakwaters. Geo-technical options identified by the study include re-grading the surrounding cliffs to reduce their gradient, improving drainage, and extending existing rock fall shelters to reduce the risk of rock fall disrupting operations.

The overall investment outlined in the strategy was more than £600 million, but NR said that some interventions should be prioritised for delivery in Control Period 6 (2019-24), while others could be deferred. The study was sent to the Department for Transport to decide on the best course of action and to find funding.

Meanwhile, the Government has provided £10m to NR for further development of its short, medium and long-term plans, to protect the railway before any plans are put to public consultation.