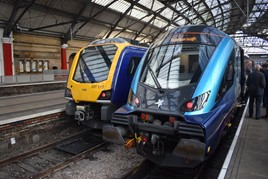 The future of the Northern and TransPennine franchises is linked to the Williams Review, according to Transport for the North Strategic Rail Director David Hoggarth.

In a TfN committee meeting on July 14, the public and press were excluded from the section discussing the 100-day review carried out after the Government’s Operator of Last Resort (OLR) replaced Arriva in running Northern (RAIL 900).

While not going into much detail regarding that section of the meeting, Hoggarth told RAIL the following day: “I think we are waiting to see the White Paper. The principles are that we want to see operators working together.

“We said to the Williams Review team that it’s better to focus on passengers and to not chase down the commercial and revenue aspects. But we didn’t come down on an exact model beyond more local say and greater accountability.”

He told RAIL that what TfN wants to see is a new way of working. This would include a more resilient timetable. He also called for a resolution to the Emergency Measures Agreements (EMAs) introduced by Government on March 23 to provide financial support during the pandemic, and which are due to expire on September 20.