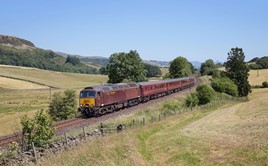 Almost 17,000 passengers used the West Coast Railways shuttles on the Lakes Line between Oxenholme and Windermere between June 18 and July 1.

The Government-funded trains were formed of two locomotives and three coaches, and ran on WCR’s charter licence (RAIL 856). They were a response to Northern’s decision to cancel all trains on the route and instead run high-quality coaches on a timetable rail replacement bus service.

WCR Managing Director Pat Marshall told RAIL: “We certainly had the full backing of both Network Rail and ORR operating these services.”
Asked if it was something WCR would do again, perhaps on other routes, she said: “Should the situation arise in the future, of course it is something we would look at.”

South Lakes MP Tim Farron raised an Early Day Motion in the Commons on July 2 to highlight the situation of trains on the Lakes Line.