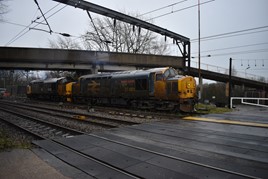 Class 37s are set to remain in traffic with Direct Rail Services for up to five more years, with a core fleet of 13 locomotives to be retained.

The remaining ten examples will be disposed of via competitive tender, in a process that should already have taken place, but which was delayed by COVID-19.

With the first of the 309-strong class reaching their 60th anniversary, the number of main line-registered Class 37s in action has declined in recent years. DRS retains the largest fleet with 23 examples, ten of which are to be disposed of with the rest running (potentially) until 2025.

In an exclusive interview with RAIL, DRS Head of Fleet Management and Stores Andy Grundy explained that this decision is not about nostalgia, but rather that it makes operational sense with the company retaining duties that only the veteran Type 3s can perform.

There is a recognition that the decarbonisation agenda, rising costs to keep them in operation, and the availability of spares will eventually render the locomotives redundant (unless a long-term deal is signed that requires them to continue, or if alternative power trials are required). But in the meantime, they will play an important role at DRS.

Circumstances have changed since 2019, when the company declared it would be disposing of all its Class 20s and ‘37s’, with heritage railways likely to receive them. Since then, life-extension overhauls have been carried out on some of the locomotives.

And while the number of duties on which they are employed has declined in recent times, following the end of contracted passenger work with Northern and Greater Anglia, as well as supplying traction for Network Rail’s Infrastructure Monitoring operations, that doesn’t mean the locomotives have stood idle.

Their main use has been on autumn railhead treatment train (RHTT) duties across northern England and East Anglia, while earlier this year stock movements also formed some of their core work.

However, Grundy explained that there’s more to the decision to retain them: “They have blue-star capability , RA5 route availability, and there’s still things only they can do.”

“We see another five years for them. We have the RHTT contract for the rest of CP6 . Without the ‘37s’, we physically do not have enough locomotives. If we are using all 13 locomotives, then who knows, we may need to resurrect more.”

“37425 has five years left. That was a life-extension project, as was 37402/419,” he said, adding that it would be the last DRS ‘37’ to receive such work, and that decisions would have to be made in the immediate future regarding some of those currently in traffic.

Their future duties will vary, although it’s expected that RHTT operations will be their main work. And periods of warm storage will enable DRS to manage the higher-mileage locomotives without the need to spend heavily.

This method will also be managed much more strictly than with the Class 20 fleet, where once the autumnal work had finished, the locomotives were stored outside for nine months before returning to their home depot at Crewe for reactivation work. The ‘37s’ will instead be rotated through the year.

“We have introduced a better policy whereby we rotate the locomotives. That protects those with higher mileage,” said Grundy.

“I think an element will always be the RHTT and ad hoc work, but we can use them on the small duties such as moving a few wagons, rather than use one of the newer locomotives. We want the ‘66s, ‘68s’ and ‘88s’ for core work.”

Ten Class 37s are needed for RHTT duties, and these are not light duties - some RHTT circuits involve 19-hour days.

Grundy said: “We will take stock after the RHTT season has ended and have a look at what’s best for the locomotives. 37401 is (almost) at the same point now that 37425 was before its life-extension work, but it’s reliable. Do we spend the money where it’s needed to keep it going?”

Another reason for keeping some of the ‘37s’ in service is their residual value following recent repairs. Grundy explained: “37422 still has value. It had an unreliable engine, but the team are confident they have got to the bottom of it.”

Reliability is a concern for locomotives dating from the first half of the 1960s, but DRS is planning ahead.

“They are not as reliable as the new kit. They need constant attention - but that has been the case in their entire career,” said Grundy.

He said that a Class 66 has an exam every 14 days (“you forget where they are because they only come back for that exam”), whereas there are usually a handful of ‘37s’ on depot for maintenance.

Selecting which ‘37s’ would be retained came down to which are the best quality. Electric Train Supply (ETS) was the original factor, due to the passenger and NR contracts, which is why so many Class 37/4s were overhauled - including 37407 and 37424 Avro Vulcan XH558, which underwent lengthy and expensive rebuilds before returning to main line traffic in 2017 and 2016 respectively, having been withdrawn by EWS in the late 1990s.

It’s also why 37716 is being retained, despite it being a ‘heavyweight’ Type 3 (this means it’s more powerful than its classmates, but is also banned from some routes that others can run along because it is heavier).

Grundy explained: “It’s in good nick. It’s not the most flexible - for instance, there are a couple of Yorkshire RHTT turns it cannot do, so we have to be selective for its duties.”

Keeping the locomotives in traffic doesn’t come cheap but remains more cost-effective than buying brand new. As other operators have disclosed, there is also nothing that can be bought off-the-shelf that meets current emissions standards.

Said Grundy: “If I wanted to take a locomotive high on hours, I would need to spend £500,000. And for that you’re looking at engine and bogie overhauls as well as repainting. But you wouldn’t need to spend that on those that have been through LORAM.”

Spare parts are also a factor: “For the Class 66s and ‘68s’, you have to buy new parts if something goes wrong, but for ‘37s’ we have an Aladdin’s Cave. There is also European Diesels at Wigan, which still has people who built the ‘37s’ at English Electric in Newton-le-Willows working for them!”

Grundy highlights how 37409 Lord Hinton has been out of traffic for several months because it dropped a piston. But rather than withdraw the locomotive, which has only recently received an overhaul, new components are being manufactured and it will return to traffic in the New Year.

It was this issue that ultimately killed off DRS’s use of Class 20s: “The prices were high and outside of RHTT they had no use.”

All DRS staff are also trained on the Type 3s, meaning there are no issues in terms of who can and cannot maintain or drive them. This helps with rostering and train planning.

Grundy also confirmed that DRS’ Carlisle Kingmoor base remains their home depot, although Crewe is more realistically their operational home. There are no plans to send any more to off-site storage locations, while those already at such facilities are due to be sold.

Hiring in locomotives has also been investigated in the past, rather than spending money on reactivating broken or long-stored examples.

“I would say you’re looking at around £20,000 to hire a locomotive in. We’ve looked at availability for RHTT work, but Colas and others were busy,” said Grundy.

He told RAIL that DRS may need to consider this option more seriously in a couple of years should spending requirements on its own Class 37s become a serious problem.

As for the very long-term future, while no life-extension overhauls are planned, Grundy said there could yet be ways that the ‘37s’ soldier on past 2025.

“They could be used for trials of new technology - quite what, I don’t know. Network Rail would rather use something newer than a Class 37.”

Nevertheless, he acknowledges: “If someone had a ten-year contract that needed them, then we would spend the money.”

The morale of Direct Rail Services staff was behind the decision to repaint 37419 and 37425 in retro British Railways liveries from the past (the former in InterCity Mainline, the latter in Regional Railways).

Head of Fleet Management and Stores Andy Grundy told RAIL: “Previously it had been about painting ‘37/4s’ in large logo livery, so I thought maybe we should do something else. That was a celebration of the final major overhauls.”