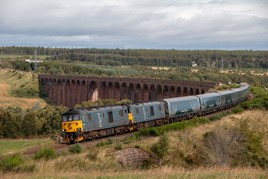 The delayed introduction of Caledonian Sleeper Mk 5s on the 'Highlander' route is “weeks away”, according to Managing Director Ryan Flaherty.

In an exclusive interview, he told RAIL: “All the coaches are here and I could probably put them all in service tonight, but I want the resilience and the spares.”

On September 23, Serco told RAIL that the coaches will be introduced onto these trains from October 13.

Flaherty explained that a retro-fitting programme is under way on the CAF stock. The work is being carried out at Polmadie, and follows problems with water ingress that corroded pipework on the new coaches.

Once that is complete, the Mk 5s will be able to serve Aberdeen, Fort William and Inverness, enabling Caledonian Sleeper to finally remove the last Mk 2 and Mk 3 coaches it currently uses.

Flaherty told RAIL: “The Mk 5 impact is less and less. As a business we are learning. Recently we cancelled a southbound train at Preston one morning due to rough riding. We now know the issue, and looking back we could have run it at a lower speed.”

He said bookings were not dropping, despite the cancellations and failures.

“In round numbers, the growth has been 25% since Serco replaced ScotRail. This is the busiest summer we have had. That is not a new train phenomenon, it is to do with the 12-month booking window. It has changed passenger behaviour in terms of booking.”