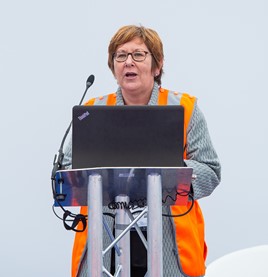 “If the Department for Transport steps back, the rail industry must be ready to step forward.”

That was the view of DfT Permanent Secretary Bernadette Kelly, as she set out her ambitions for the ongoing Keith Williams-led Rail Review during a speech at Rail Live on June 19.

While hopeful that her Department would become less involved in operational matters on the railway as a result of Williams’ forthcoming recommendations, she warned that such a reorganisation could only take place if the industry is able to effectively assume those responsibilities and “deliver the quality of service the public expects and deserves, along with value for money, a continuous commitment to innovate for the customer, and a willingness to demonstrate responsibilities to communities and wider society”.

Kelly told Rail Live visitors that she had been “amazed” by the sort of low-level, non-strategic decisions being made by DfT officials ever since commencing her role in 2015, which has resulted in her enthusiastic backing of the Rail Review.

She said: “I was amazed to find myself presiding over discussions about what colour to paint trains - pages of analysis assessing whether to paint the IEP trains destined for Great Western Railway grey or green.

“Decisions on detailed stopping patterns for particular services around the country, and ministerial meetings debating whether rolling stock on certain routes should have flip-back tables or not.

“I believed then, and I believe today, that when Whitehall is so deeply immersed in the minutiae of delivery, it stifles innovation we would normally expect the private sector to provide, and disempowers people outside government who are paid to do the same work, while also undermining the accountability of the industry to passengers.”