EXCLUSIVE: Grayling: next PM will commit to “essential” HS2 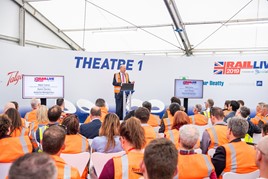 Secretary of State for Transport Chris Grayling has insisted that whoever becomes the next Prime Minister will commit to HS2, despite frontrunner Boris Johnson threatening to scrap the £56 billion project by the end of the year.

Speaking at Rail Live in Long Marston on June 20, Grayling described HS2 as “an essential part of the future of the railway” that would be difficult for the winner of the Conservative leadership contest to “step away from”.

While leadership candidate and Foreign Secretary Jeremy Hunt is known to fully support the scheme, his rival Boris Johnson restated his long-held scepticism of HS2 just two days after Grayling’s remarks, when he told a hustings event in Birmingham on June 22 that he had “anxieties about the business case”.

Johnson went on to pledge that a “go or no-go decision” would be made in December over whether to proceed, following an independent review to be conducted by former HS2 Chairman Douglas Oakervee.

Responding to mounting speculation that what will become Europe’s largest construction project could be cancelled, Grayling said: “My view is very straightforward. HS2 has already started, there are already 9,000 people working on the project, and there are pre-works going on around London Euston station and in Birmingham, where a huge amount is happening.

“Although HS2 has some enemies, it also has some powerful friends in the Midlands and in the North. And my judgement, for what it’s worth, is that as long as Allan Cook and Mark Thurston deliver a smooth project that does what I told them it has to do - which is to arrive on budget - then I’ll be very surprised if anyone in government takes a step away from it.”