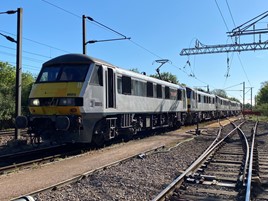 No main line locomotives are allocated to Norwich for the first time since the 1840s, after 13 Class 90s left for a new career with Freightliner at the start of May.

After replacing them with Stadler Class 745 electric multiple units on the Norwich-London Liverpool Street route, Greater Anglia withdrew its fleet of 15 electric locomotives at the end of March. Two transferred to Locomotive Services Ltd, with the rest moving to Freightliner. All 15 were sold by Porterbrook to their new operators.

FL will use the ‘90s’ on intermodal trains, with their entry into traffic likely to be from July at the earliest.

The 1700 Norwich-London Liverpool Street and 1930 return on March 24, powered by 90001, were the final locomotive-hauled trains on the Great Eastern Main Line. Since then, all services have been in the hands of ‘745s’.