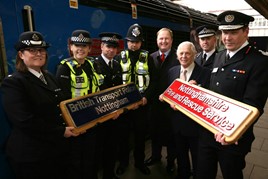 Nottinghamshire Fire and Rescue Service and British Transport Police Nottingham have been honoured by East Midlands Trains, in recognition of their swift emergency response to a significant fire that broke out on Nottingham station concourse on January 12 (RAIL 845).

Representatives from a range of organisations that provided support to EMT during the fire were invited - including East Midlands Ambulance Service, which attended the incident in case of any injuries (although none would arise following a rapid evacuation).

Nottingham City Council helped enforce road closures around the station, while BTP and Nottingham Police co-ordinated the emergency services - including the 60 firefighters who battled for 12 hours to extinguish the blaze, successfully protecting much of the Grade 2-listed building from being extensively damaged.

Network Rail staff and contractors were also invited to the ceremony, having helped to reopen much of the station less than 24 hours later.

Joining RAIL trom an editorship at a renewable energy magazine, Paul plans the features for RAIL and writes both news and features across a number of disciplines. He also plans our regular supplements and contributes to RailReview.

@BunkerGraeme @DavidHorne Dame Diana Rigg one side and Emma Peel the other....her daughter could name both sides!