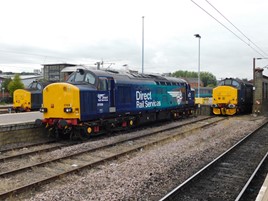 An internal traction strategy has been produced by Direct Rail Services that plans to gradually eliminate the heritage part of the company’s fleet - starting with Class 20s and ‘37s’.

DRS Managing Director Debbie Francis told RAIL that the speed and extent of the plan will depend on customer demand for the traction, with Network Rail’s requirement for Class 20s for seasonal railhead treatment work being an example. Except at a client’s behest, no further heavy maintenance will be carried out on these classes.

The locomotives will not be sold, but will be offered to heritage railways for service off the national network at a peppercorn charge. This approach has previously been used successfully.

DRS has also been going through a procurement process for the purchase (rather than lease) of ten locomotives with the same specification to its Class 68s. These will be deployed on general freight work.

By virtue of being a subsidiary of the Nuclear Decommissioning Authority, public procurement rules have made the process protracted, but DRS will shortly seek best and final offers from bidders. The delivery of these will help with the elimination of heritage traction.

DRS has already renewed the lease on the first ‘68s’, because they are now over five years old. Class 68s are now the preferred traction for DRS nuclear traffic. These services involve the use of two locomotives at the request of the clients in order to ensure 100% redundancy in the event of a failure. The requirement is part of the safe and secure transit of the load, where the cost of the motive power represents a small element within the overall cost of managing nuclear fuel.