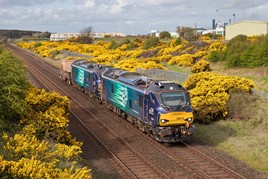 Direct Rail Services (DRS) wants more investment on the “long-forgotten” Cumbrian Coast Line in order for the area to succeed in the future.

A number of new nuclear sites are currently being built along the scenic line – which runs from Barrow-in-Furness to Carlisle - however, parts of the line only has one track, which limits the number of freight and passenger services that can use it, as well as the speed at which trains can run.

Connelly hinted that DRS would be willing to invest in improvements to the line, but only as part as a consortium: “I think it’s one of those things where different people need to come to the party. There’s a lot of growth in the Cumbrian Coast line, with the energy sector and absolutely DRS is willing to play its part in that, but I think it is part of an overall part of investment and upgrade,” he said.