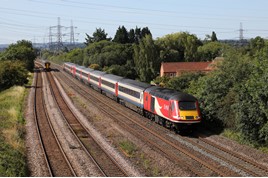 Non-compliant High Speed Trains in the Midlands and Pacers in Wales have been granted further dispensation by Government to continue operating.

The original date for the withdrawal of fleets that failed to meet new accessibility regulations was December 31 2019.

This has now been further extended for seven sets (56 coaches) plus five spare vehicles until December 31, although it‘s likely that HSTs will remain in traffic until May 2021 (RAIL 910).

EMR confirmed its extension to RAIL on July 29, with the Department for Transport publishing the letter granting the dispensation the following day.

Meanwhile, 30 two-car Pacers (15 Class 142s and 15 Class 143s) that had been granted an extension to July 28 will also remain in traffic with Transport for Wales.

Dispensation for the TfW fleet expired on July 31, but a letter (dated July 17) was published at 1750 on the final day granting an extension until 0200 on December 31,

A document regarding dispensation, submitted by TfW to the DfT and dated September 20 2019 (and updated last month), reveals that Wales was originally due to have nine new Class 769 FLEX bi-modes in traffic from June 2018.

However, when Transport for Wales replaced Arriva Trains Wales on October 14 2018, only a quarter of its entire fleet was compliant.