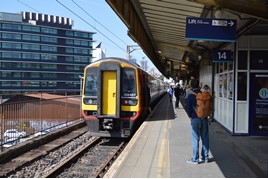 Uncertainty continues over plans to split the Norwich-Liverpool Lime Street service at Nottingham.

When Abellio was confirmed as the new East Midlands franchise operator in April, Government announced that the route would be split at Nottingham, with trains from East Anglia to run to Derby from 2021.

East Midlands Railway Managing Director Julian Edwards told RAIL that the plans were still being finalised. He explained that there are three options, with the favoured plan thought to be transferring Nottingham-Liverpool to TransPennine Express. This would use Class 68/Mk 5A sets, with TPE retaining the 22 Class 185s it is due to send back to Eversholt Rail from the end of the year.