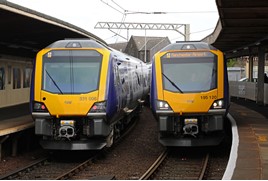 Government could axe the Northern franchise at the end of the year, with contingency plans being developed to replace the existing deal with either a new short-term management contract (with Northern) or an Operator of Last Resort (OLR).

A Department for Transport spokesman told RAIL on October 16: “In the context of significant challenges facing the operator, such as delays to infrastructure upgrades and historic underinvestment in the northern rail network, issuing a Request for Proposal enables the Department to examine whether the contract is properly aligned with current operating challenges in the North.

Secretary of State for Transport Grant Shapps told the House of Commmons Transport Select Committee on October 16 that he has requested proposals from Northern and an Operator of Last Resort, in a bid to resolve the issues.

“If you’re a Northern passenger you’re probably as frustrated as I was about the 2018 timetable changes,” he said.

Northern Managing Director David Brown said: “It’s on record that the Northern franchise has faced several material and unprecedented challenges in the past couple of years, outside the direct control of Northern. The most significant of these is the ongoing, late delivery of major infrastructure upgrades."

David Hoggarth, Strategic Rail Director for Transport for the North, said: “Our members have made clear their frustration over a number of performance issues in relation to the Northern rail franchise. While we are now seeing some new trains come into service, albeit late, there are still underlying issues that remain a matter of concern,” he said.

“In order to rebuild confidence with the travelling public, we are of the view that, should it be necessary, putting in an Operator of Last Resort would be the only feasible solution for any interim arrangement."

Henri Murison, Director, Northern Powerhouse Partnership said: “Northern leaders have a preference for an Operator of Last Resort, but I would suggest that many business leaders would prioritise that government bought more new trains for the North rather than focus on moving around the deck chairs on the Titanic."