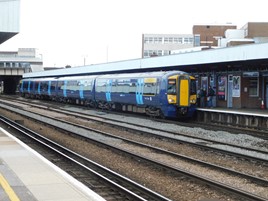 Government cancelled the South Eastern franchise competition on August 7, citing “significant concerns” that the ongoing process would mean greater cost to the taxpayer.

Only two bidders had been left in the process, following the decision to ban Stagecoach from the South Eastern, East Midlands and West Coast Partnership franchise competitions last April (RAIL 877).

The remaining bidders were Abellio with East Japan Railway and Mitsui & Co, and current operator Govia. Earlier in the process, Trenitalia had pulled out of the bidding.

The new franchise had been due to be awarded this summer, but will continue in Govia’s hands under a Government Direct Award that will run to April 2020.

The Department for Transport said the decision “follows significant concerns that continuing the competition process would lead to additional costs incurred to the taxpayer, with no certainty that this would deliver envisaged benefits for passengers in a timely fashion."

On-board hand-sanitiser dispensers, space-saving perch seats and under-seat storage areas are among the ideas under consideration