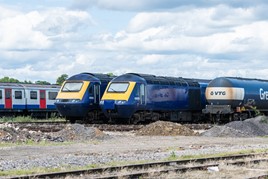 A petition has been sent to Kenilworth and Southam MP Jeremy Wright calling for stored High Speed Trains to be used by CrossCountry.

RAIL contributor Fraser Pithie has organised the petition, with the aim of questions being asked in Parliament about the ex-Great Western Railway trains being used to alleviate overcrowding on existing XC operations.

In the House of Commons on June 24, Layla Moran (Liberal Democrat, Oxford West and Abingdon) asked what assessment had been made of the potential merits of introducing high-speed trains on XC services serving Oxford, to increase capacity.

However, sources within the rail industry suggest using HSTs is not a simple solution, as some believe.

One XC source told RAIL: “We cannot use the GWR power cars without the Automatic Train Protection being removed, as none of our drivers are trained on it. Until that changes, and the Direct Award is sorted out, there’ll be no change. We do need more stock, though!”

In his letter to Wright, Pithie writes: “The routes between Reading, Coventry, Birmingham and Derby are particularly affected, as are some services between Bristol and Birmingham. Using HSTs would replace four and five-coach trains with seven-coach trains, significantly increasing the available seats while also overcoming the weather-related reliability issues in the South West affecting passengers between Exeter, Newton Abbot, Plymouth and beyond.”