DB: how will events in Berlin affect the UK? 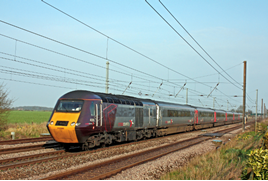 It must be nice to have good news just after taking over an organisation - and new Deutsche Bahn Chief Executive Richard Lutz had something positive to announce on March 23.

Just a day after being named as Rüdiger Grube’s permanent successor, and standing in front of two of DB’s Intercity Express high-speed trains, former finance boss Lutz explained that in 2016 the German railway giant returned to profit after the previous year’s loss.

The naming of the ‘money man’ for Deutsche Bahn’s top job was anticipated, especially given that he had been acting CEO since Grube’s unexpected departure at the end of January.

But while there was upbeat news for this long-term DB manager to announce at the press conference, held in its home city of Berlin, the company faces significant challenges both at home and abroad.

Germany’s wholly state-owned railway company is in the midst of a restructure. Last year it agreed with politicians what amounts to an injection of cash. And challenges remain on both the freight side and at home, with competition from long-distance buses. Liberalisation of the latter took place in 2013 - before that, such services were largely banned.

In September DB attracted widespread headlines when it was reported that the state had agreed to pump in another one billion euros to help the organisation’s capital position, a further 2.4 billion euros over four years, and effectively 1.4 billion more in reduced dividends paid to its owner, the Federal Republic.

DB’s ownership means that its direction is ultimately driven by German governments, and this makes a decision such as the appointment of a chief executive a political as well as commercial one.

So, following Grube’s departure, it was Federal Minister for traffic and digital infrastructure Alexander Dobrindt who announced that the replacement would be decided on at the next DB supervisory board meeting. That supervisory board is made up 50/50 from representatives of the workers and the German state, as shareholder.

The huge concern is that since its creation in 1994 DB has been through different phases - in the period before the financial crash it was being controversially lined up for flotation, a project that subsequently was effectively abandoned. The company also pursued major overseas expansion to create a worldwide logistics giant - not least through the acquisition of Britain’s EWS (in 2007) and Arriva (in 2010), as well as chasing franchises in its own right.

Last year also featured a restructuring that dissolved DB Mobility Networks Logistics (of which Arriva was part), by merging it into the parent company. This removes what had been a two-tier structure.

What does all this mean for the UK? Given DB’s widespread activities in this country - Arriva claims around 22% of the passenger rail market - what happens with the German giant can have profound effects here, too.

However, rather than circumstances outside Britain, the news last year of hundreds of job cuts at DB Cargo UK (RAIL 812) was driven by domestic conditions in this country - not least the collapse in bulk coal traffic that has been such a staple of rail-borne freight.

British passenger activities run by the German state-owned concern include the train operators CrossCountry, Northern, Arriva Trains Wales and Chiltern, as well as London Overground and the open access operator Grand Central. It has also operated the Tyne and Wear Metro, although as this issue of RAIL went to press this was due to transfer to Nexus, the local transport authority.

Other than international long-distance trains, all DB’s passenger activities outside Germany have been grouped under Arriva since 2011. That includes not only trains but also buses (in which sector it is the UK’s third-placed operator). The DB subsidiary is organised into three divisions: UK bus, UK train and Mainland Europe.

Last year, it was widely reported in Germany that DB had intended to raise cash by floating Arriva through an Initial Public Offering (IPO) - but this was shelved in the light of the pound’s depreciation against the euro following the Brexit referendum, and the consequent reduction in the expected return.

So, where do things stand now? DB confirmed to RAIL in March that “currently there are no plans for an IPO or for a partial IPO” of Arriva.

Furthermore, beyond those already announced staff cuts at DB Cargo, in terms of other measures likely to have a significant effect on either Arriva or DB’s operations in the UK the organisation said there is “nothing planned as of now”.

In all this, though, Brexit has perhaps shown one of the ironies of globalisation. There have long been complaints about overseas state companies running sections of Britain’s privatised railway (and profits moving elsewhere), but it is now a domestic British vote that has upset the plans of one of the giants among those organisations.

With ‘Article 50’ only just triggered, the ultimate consequences of last year’s referendum vote are, of course, still far from clear - for the railways as for other sectors. Yet regardless of Brexit, it remains true that decisions regarding DB’s activities and its ‘footprint’ in the UK will not only be subject to commercial concerns here, but also - partly at least - to Germany and its politics.

The first permanent chief executive has been appointed for an institution that is set to become a prime funder of new rail infrastructure.