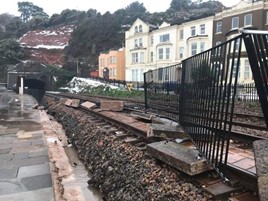 Dawlish Sea Wall was damaged last night as a result of Storm Emma.

Network Rail confirmed visual inspections were completed this meaning and that no structural damage was found. NR said the integrity of the railway had not been damaged.

But it did say that 10-15 metres of fencing and associated coping stones have been damaged, with some now lying on the railway. NR is working to make this safe temporary fencing needs erecting. It added that a substantial amount of ballast was washed across the track along a 150 metre section of railway. Engineers are now working to remove and replace the ballast it said.

Dawlish station has suffered minor damage, with wooden panels and handrails washed onto the track, and a small section of the platform damaged. NR is currently repairing the station.
NR Western Route Managing Director Mark Langman said: “Team Orange will be working round the clock to make the railway safe so that it can reopen. There will be no services on this line today and we will issue an update later today confirming when we expect to reopen this section of the railway. Currently reopening is anticipated to be within the next 24-36 hours.”