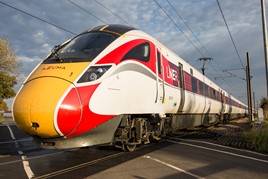 LNER has confirmed that its Class 800/801 Azuma fleet will not enter traffic this year.

The Hitachi Intercity Express Programme trains had been due to start carrying passengers in December, but that has now been delayed.

LNER told RAIL on October 25, said: “We are introducing them in 2019. The reason is it will give passengers more confidence and we can prepare properly. There are several different issues at the moment, not one specific reason, and we do not want uncertainty.”

A Hitachi spokesman said: “Hitachi remains on track to hand over completed new Azuma trains to LNER in early December, so they can continue their driver and on-board staff training and readiness programme.”

LNER added that the operator was working towards type acceptance for the trains.

The Office of Rail and Road (ORR) has suspended approval of the trains due to the design of the inter-car connectors (RAIL 863) and issues with signalling (RAIL 861). Since August 1, the trains have been unable to operate in electric mode owing to interference with signalling north of York.