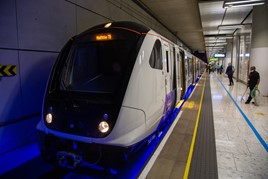 Nine-car Class 345s have returned to traffic, having been withdrawn from service over safety concerns (RAIL 910).

The trains, built for Crossrail, had been used on the London Paddington-Reading route and Paddington-Hayes & Harlington shuttles. They were taken out of service while modifications were made, leaving the shorter seven-car ‘345s’ to cover all duties.

The first set returned to traffic on July 30 (345004), making the debut for the TfL Rail electric multiple units on the London Paddington-Heathrow Airport route (albeit 26 months late).

This was a day after Crossrail Chief Executive Mark Wild told a Transport for London Board Meeting that the plan was for them to return to traffic soon.

“We have a real challenge in that the full-length units have been on the bench for a few weeks because they have a safety bug we picked up,” Wild said.

“The FLUs really do need mileage accumulation. Their reliability is really quite low for what it should be, but that’s because they have not been exercised properly.

“We need to run them to Reading and Terminal 5 as it’s mileage on the clock. We can almost run a full trial running service from October.

“The trains are holding up mechanically, the problems are in the software space. I think we have a good train, actually.”

All 70 Class 345s ordered by Transport for London for Crossrail will eventually be nine-car formations, although many were delivered as shorter sets.