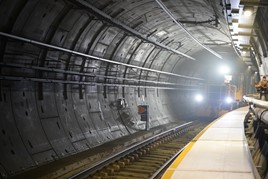 Crossrail trains could begin operating through central London by the end of next year - if trial running begins before the end of the first quarter of 2021.

Crossrail Ltd Chief Executive Mark Wild told RAIL on October 12 that a six-week blockade carried out in the summer enabled tunnel work to be completed and the company to catch up on work delayed because of COVID-19.

There were some 1,200 tasks to be completed during the period. These included repairing tunnel defects, installing safety equipment and sealing the platform doors at stations (these must be airtight).

“We now need to get to SIDT . And after that it’s trial running. That is pivotal,” said Wild.

Asked when trial running could start, Wild told RAIL: “It won’t be earlier than the latter stages of the first quarter. We announced the window of opportunity for when Crossrail could open to the public, and that was the first half of 2022. If we get trial running before the end of the first quarter of 2021, then we could start running earlier than that, potentially towards the end of 2021.”

He said that once the project is ready for trial running there will be much more certainty over when the heavily delayed railway can finally open its first underground section between Paddington and Abbey Wood. Once trial running is under way, it marks the transition from construction to an operational railway.