COVER STORY: Northern to be axed... calls grow for TPE to follow 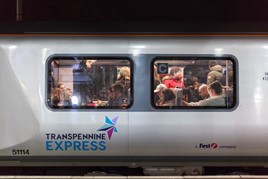 Should Government strip Arriva of the current Northern franchise, the same should happen to TransPennine Express.

That’s the verdict of Northern Powerhouse Partnership Director Henri Murison, commenting after Secretary of State for Transport Grant Shapps told the BBC on January 2 that he intended to axe the current deal for Northern.

Shapps subsequently elaborated that this was the process he had started in October, which will result in either Arriva retaining the franchise via a Direct Award or an Operator of Last Resort being appointed to run the franchise instead.

It’s not just Northern under threat. There is also a possibility of South Western Railway going back into public ownership and calls for Abellio to lose West Midlands Trains.

Additionally, staff from the Operator of Last Resort (OLR) have been assessing Great Western Railway since last October, as the current Direct Award is due to finish at the end of March. Sources expect FirstGroup to receive a third Direct Award, although there is the option for Government to take it back in-house.

Speaking on TPE, Murison said: “The comments by the Transport Secretary reflect the position as it has stood for some time now - Northern will need to become a short-term contract renegotiated to reflect the long-term structural issues, or will lose the franchise.

“It’s often wrongly believed that Northern is responsible for the abject performance of the whole of the rail network in the North. This is not the case - TransPennine Express is equally as bad, if not worse, having mismanaged the new train timetable introduction last December.

“It’s clear that government are rightly listening to Northern leaders’ calls to take action, and our clear view is that both Northern and TPE should be treated the same by the Transport Secretary. The same process under way for Northern should be triggered with TransPennine for its unacceptable performance levels.”

Murison also warned against splitting Northern into two, saying that was a “knee-jerk response and would likely make problems worse”.

A Department for Transport spokesman told RAIL that the suggestion of splitting Northern was not something the Government had considered.

“As the Transport Secretary said, he has started a process which would either strip Northern of its franchise or issue a short-term contract to them,” he said.

“We are taking action to ensure passengers in the North get a better service and we will provide an update in due course.”