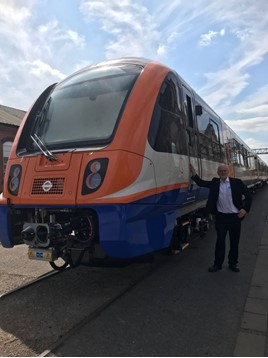 Corbyn told workers and union representatives how a Labour government would prioritise British manufacturing, by changing public procurement rules to favour indigenous jobs and companies. He was then given the opportunity to drive a new Class 710 on order for London Overground’s Gospel Oak-Barking route.

He said that, according to the Office of National Statistics, the number of jobs in the manufacture of locomotives and rolling stock had fallen by 12.5% in the UK since 2011. Turnover in the sector has also decreased by 10% during the same period, with large train orders going to foreign competitors - including the £1.6 billion Thameslink contract to German-based Siemens in 2011, and a £490m order from Arriva Rail North placed with Spanish firm CAF in 2016.

However, both companies have since announced that they plan to build train factories in the UK.

Corbyn said this showed the Conservative government was “bad for workers and bad for business”. He added: “I was proud to work with the Barking to Gospel Oak Campaign to stop the line from being closed under the Tories, and equally pleased to see it electrified. So, I was delighted and surprised to be given the opportunity to drive one of the new trains that will run on the route.

“This has created jobs in Derby and will provide a better, cleaner and quieter service for the people of north London.”