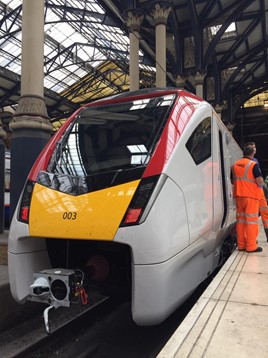 Twelve-car Stadler Class 745s have been authorised for passenger traffic by the Office of Rail and Road, subject to stipulations being met.

This means that after crew training, Greater Anglia can introduce the trains on its Norwich-London Liverpool Street and Stansted Express routes.

However, before they enter traffic, GA must ensure that the safety management system on the electric multiple units is suitable for passengers to board and disembark, while low-speed validation of lateral forces are required.

Approval was granted at the same time as the first inter-city Class 745/0 reached London. GA 745003 arrived at Liverpool Street on July 19, having undergone braking and speed tests on its way south from Norwich Crown Point.