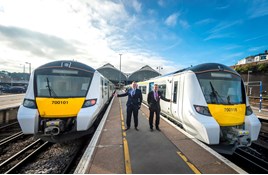 September 18 was the first weekday on which all Thameslink trains were operated by Class 700s.

This was welcomed by Gatwick Airport, where Chief Commercial Officer Guy Stephenson said: “These new carriages are ideally suited for air travellers, and the longer trains will make a real difference to the increasing number of passengers using the airport and travelling by rail.

“The new Thameslink trains also form part of the exciting transformation of rail services at Gatwick. By 2018, rail capacity through Gatwick will have doubled in just ten years, and our passengers will start to see the benefit of trains leaving the airport for London with Tube-like frequency every three minutes.”

More 12-car sets will be introduced when additional stabling facilities are built in Bedford. Govia Thameslink Railway, which runs the Thameslink route, says that already there are 15% more carriages in service in the peaks on the route.

GTR Engineering Director Gerry McFadden said: “Right now, it means trains up to three times longer on the off-peak services between Brighton, Gatwick Airport and London Bridge, and from May next year hundreds of thousands of new passengers from east Kent, Sussex, Cambridge and Peterborough will be plugged into the cross-London route when the Thameslink network expands.”

Rail Minister Paul Maynard said: “I am delighted we have reached this significant milestone for the multi-billion-pound Thameslink programme. It shows how our investment in the railways is delivering better journeys for passengers across the network, as well as supporting jobs and growth.”

Vernon Barker, Managing Director of Siemens UK Rail Systems, said: “We are really pleased to mark this major milestone in the introduction of the Class 700, which is one of the largest and most technologically advanced fleets of trains ever introduced in the UK.”