Class 385 interiors to be fitted in Italy 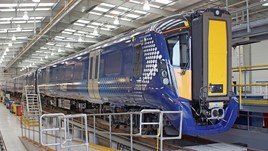 Four Class 385s will have their interiors fitted at Hitachi’s facility in Pistoia (Italy), before they enter traffic with ScotRail.

A Hitachi spokesman explained that the four pre-series trains must visit Italy, rather than the company’s Newton Aycliffe facility, because their build has reached too advanced a stage for them to be slotted into the production line at the county Durham site.

The four ‘385s’ will return to the UK in the autumn and are expected into traffic before the end of the year.

There is still no date for the trains to enter traffic, but Hitachi told RAIL on April 30: “We’re doing everything within our power to deliver a fleet of brand new electric trains as quickly as possible for passengers in Scotland.”