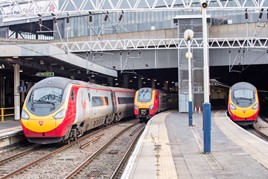 China is “very interested” in helping to shape the future of the UK’s high-speed rail network.

Speaking exclusively to RAIL, Ma Hui, Minister of the Embassy of the People’s Republic of China in the UK, said he “sees potential opportunities for co-operation in the rail sector between the two countries”.

“We’re not limited by our imagination - we need to explore all ideas of co-operation and this absolutely includes running high-speed trains in the UK. China has the largest amount of high-speed rail networks and the UK is building several lines, so Chinese companies are very much interested in playing a part in it,” he said.

Hui said Chinese companies are “still negotiating” to join the final list of partners involved in the construction and running of the HS2 rail link between London and the North.

“We are still keen to join the efforts, and we can play to each other’s advantages,” he said.

“We are open to all ideas. The Chinese railway companies have offices in the UK and they are monitoring the situation. They are trying their best to win a share and to take part in these projects, but it is a complicated business. We need to keep the channels of dialogue open and try to work to each other’s advantages.

Hui explained there are cultural differences between the two countries that can make working together difficult, but said the UK and China can learn from each other.

The UK’s first training centre for the installation and maintenance of slab track, to be used on HS2, was opened at the City of Wolverhampton’s Bilston complex

HS2 Ltd is exploring the use of alternative fuels for its construction vehicles, after trials revealed they are more efficient than the traditional red diesel.