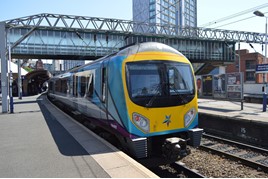 Passengers and regional stakeholders may have to accept a temporary reduction in the number of train services running through the Castlefield corridor, as a short-term measure to improve reliability.

In September 2019, NR released a report confirming that 13 trains per hour is the maximum number of services that can be dependably operated on the mile-long corridor from Manchester Piccadilly’s Platforms 13 and 14 to Deansgate via Oxford Road “without an infrastructure intervention”.

Such an intervention had been planned, before former Secretary of State for Transport Chris Grayling postponed a multi-million scheme to construct two additional through platforms (numbered 15 and 16) at Piccadilly in 2017.

With 15tph currently routed through the Corridor, Shoveller said that options to reduce congestion were currently being explored - including the rerouting of two hourly services from Manchester Airport into Piccadilly’s terminating platforms, where they can then reverse to serve destinations east of the Pennines.

This arrangement applied until May 2018, when they were diverted to run through Manchester Victoria and then onto Piccadilly via the Castlefield Corridor and the newly opened Ordsall Chord.