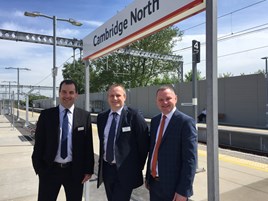 Cambridge North has welcomed its first passengers, with the first trains calling on May 21.

Operated by Greater Anglia, the three-platform station serves the city’s northern suburbs and science and business parks, relieving pressure on Cambridge’s main station to the south.

Initially four GA services will call here each hour - one arrival and one departure for London Liverpool Street, plus services between Cambridge and Norwich. An extra service to Stansted Airport will be added by GA in 2019.

Four Great Northern services also call at the station each hour - two to London King’s Cross, one to Ely and another through to King’s Lynn.

The station’s design was conceived to reflect the city’s famous university and status as an ancient seat of learning, with metal cladding on the outside of the main building and footbridge incorporating a pattern based on a mathematical theory called The Game of Life by Cambridge mathematician John Conway.

Cambridge North has a 1,000-space cycle park, and a car park for 450 cars. It is also served by Cambridge’s guided bus services and other local buses, and is close to the region’s arterial A10 and A14 roads.

“The existing station at Cambridge is one of our busiest stations. This station should relieve some of the pressure on it. It takes about 30 minutes to drive from Cambridge station to Cambridge North, but just six minutes by train, so it should be a great boost to people commuting to work in the science park, or for people commuting from northern suburbs or villages.”