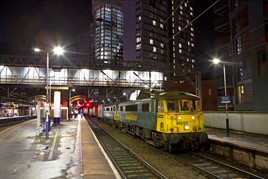 The Government’s new High Speed North programme must put the needs of freight customers on an equal footing with passenger operations, as it reviews how HS2 Phase 2b and Northern Powerhouse Rail will serve northern England.

That is the message from Director General of the Rail Freight Group, Maggie Simpson. Speaking in Manchester on February 12, she said: “The railways are delivering £750 million worth of value to the northern economy from the freight that’s moved each day.

“We estimate that we keep 1,700 lorries off the road in Greater Manchester per day, while we also move about one million tonnes of construction material into this growing city each year.

“Rail freight in the North has been a huge success story and I speak to lots of customers who want more of it because it’s green, cost-efficient, and there’s a shortage of 60,000 HGV drivers across the UK.

“We’re optimistic about the opportunities for growth, but if we have inferior or non-existent transport links then we’re trying to do this with our hands tied behind our backs.”

Simpson said the success of new government initiatives such as the creation of free ports in the UK relies upon changing attitudes towards rail freight, as potential customers require greater confidence that their needs will be served and that there will be sufficient network capacity.