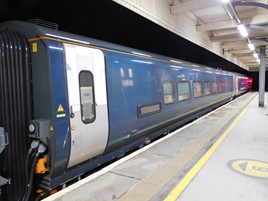 The planned introduction of Caledonian Sleeper’s CAF-built Mk 5s has been delayed from this month to next Spring.

The Spanish-built stock had been due to enter service on October 28 on the London Euston-Edinburgh/Glasgow Central ‘Lowlander’ route.
However, CS Managing Director Ryan Flaherty said on October 1 that that would not happen. He said: “With five different accommodation types, as well as on board catering, dining and shower facilities, this is the most complex introduction of new rolling stock ever undertaken in the UK, and we are determined to get it right.”

The operator claims the stock will be in traffic on both its Lowlander and Highlander routes by the end of May 2019.

It is still planned that the Central Belt service will be introduced first, quickly followed by the trains to Aberdeen, Fort William and Inverness.