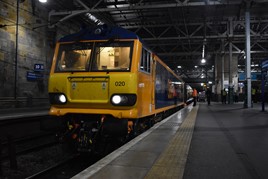 How the train was driven, the suitability of relevant procedures and working practices, and the design and approval of the brake system fitted to the Mk 5 coaches are some of the factors that Rail Accident Investigation Branch will look into, following the Caledonian Sleeper runaway at Edinburgh Waverley on August 1 (RAIL 885).

RAIB will also investigate any relevant underlying management or organisational factors, how the isolating valve came to be closed at Carstairs, and the preparation of the train at Carstairs - including the coupling of the Class 92 to the Mk 5s and testing of the train’s brakes.

The incident happened at 0726, when the Edinburgh portion of the 2336 London Euston-Edinburgh Waverley/Glasgow Central failed to stop at the Scottish capital’s main station. The train was brought to a stand approximately 650 metres beyond its intended stopping point.

There was no damage and no injuries were sustained, but RAIB stated: “The outcome could potentially have been much worse, had it led to a collision with another train.”