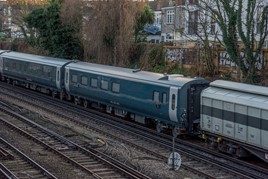 Built in Beasain, Spain, the coaches have been tested at the Velim test track in the Czech Republic.

CS has confirmed that Mk 5s will enter traffic from October, initially on the London Euston-Edinburgh Waverley/Glasgow Central ‘Lowlander’ trains. An exact date has not been confirmed.

Peter Strachan, Chairman, Caledonian Sleeper, said: “We believe the new Caledonian Sleeper trains will truly set a new standard in overnight travel and we have worked closely with Transport Scotland on their development since taking over the franchise in 2015.

“The Sleeper is known throughout the UK as a great way to travel and it is our intention to improve on every aspect of that journey, while offering great value of money for our guests. It is particularly exciting to welcome the first carriages to Scotland, as it highlights just how close we are to the debut of the new trains on our Lowlander route this October.”