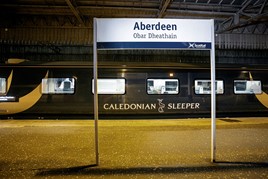 They did not serve Fort William until October 14 because the West Highland Line was shut for engineering work.

“Our new trains have been years in the making and to see them complete their introduction to service is extremely exciting for everyone involved,” said CS Managing Director Ryan Flaherty.

“We have worked really hard to learn lessons from introduction of the trains on the ‘Lowlander’ route earlier this year.  We are now confident that all passengers can rely on the Caledonian Sleeper to provide the journey of a night time.” For the