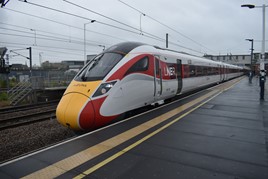 Britain’s newest inter-city train is to attend Rail Live. LNER’s Azuma, which entered passenger-carrying service in May (RAIL 879), is planned for display at the Quinton Rail Technology Centre as part of the June 19/20 event.

LNER Managing Director David Horne told RAIL: “We are incredibly proud that one of our state-of-the-art Azuma trains will be featured at Rail Live 2019. As the newest and most advanced train in the UK, it will be a wonderful opportunity to showcase the many features and benefits Azuma brings to creating the very best customer experience.”

Bringing the rail industry together at a single venue, Rail Live continues to develop. Department for Transport Permanent Secretary Bernadette Kelly has joined the line-up as a keynote speaker, and will present an update on the Williams Review. Kelly joins other speakers including Network Rail Chief Executive Andrew Haines and (subject to parliamentary business) Secretary of State for Transport Chris Grayling.

With Great Western Railway running special trains direct to the show from Paddington, using an Intercity Express Train, LNER’s announcement means that Hitachi’s new units from both its current users will be present.

Demonstrations at Rail Live will include the positioning of switches and crossings by Network Rail’s only Kirow crane. The infrastructure owner will also display a High Output Ballast Cleaner, a survey helicopter and its Class 950 Track Recording Unit.

Together with Cranfield University, NR will demonstrate tenth-scale equipment that automates the finding and repairing of track faults. The system combines the use of cameras, a robot and 3D printing. It uses an open source controller as its ‘brain’, is independently powered by battery, and communicates using wireless technology.

Debuts at this year’s show include Porterbrook’s Innovation Hub and its HydroFLEX - the UK’s first full-sized hydrogen train. Vivarail is to display its fast charging system and battery-powered Class 230.

The British Transport Police will bring a command vehicle, firearms team, CCTV van and public order section, while its dog team will carry out a display.

Among the other exhibitors is digital, energy management and automation specialist Schneider Electric, which will be taking its largest ever stand.

This year, Rail Live will also feature a dedicated ‘Apprenticeship Zone’, where the Young Rail Professionals will promote the industry as a place to work.

To be held at the Quinton Rail Technology Centre in Long Marston on June 19/20, Rail Live is expected to be attended by more than 6,000 people and 250-plus exhibitors.