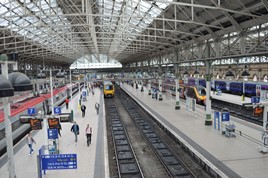 A new Trans-Pennine rail route between Manchester and Leeds will be confirmed today (July 27), as new Prime Minister Boris Johnson sets out a domestic agenda to turbo-charge regional growth and prosperity.

In a speech in Manchester, Johnson will reaffirm that one of his top domestic priorities will be to level out opportunities, and unlock the potential not just of London and the South East - but of every corner of the UK.

He is expected to outline his major domestic agenda, including investment in education, tackling crime, boosting connectivity, and improving technology across the country.

Pledging new intercity rail routes, with Manchester-Leeds as the first step, the Johnson is expected to say: “I want to be the PM who does with Northern Powerhouse Rail what we did with Crossrail in London.

“And today I am going to deliver on my commitment to that vision with a pledge to fund the Leeds to Manchester route.

“It will be up to local people and us to come to an agreement on the exact proposal they want – but I have tasked officials to accelerate their work on these plans so that we are ready to do a deal in the autumn.”

Johnson is expected to set out his vision to rebalance power, growth and productivity across the UK.

At the heart of this will be a commitment to deliver Northern Powerhouse Rail. The first step will be the Manchester-Leeds route, with detailed plans published this autumn, following the review into HS2.

The new route is expected to cut journey times significantly and provide additional capacity for people across the region.

But Johnson will also be clear that his focus will not just be about major infrastructure projects.

He will pledge to “improve the unglamorous local services which people use every day,” such as buses, saying it is about “services within cities, not just services between cities.”

He will say: “I want to help local leaders bring their local services in all our towns and cities up to the standards of the best.

“And I want that to start now, with improvements that can happen in the short term, not just big engineering schemes that will take years.”