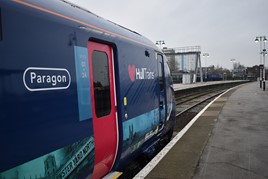 New Class 802/3 ‘Paragons’ should be in charge of all Hull Trains services from December 15, with the open access operator hoping to run them to destinations other than London from next year.

The first of five five-car Hitachi ‘802/3s’ was unveiled to invited guests at Hull station on November 25. It was due to enter traffic the following week (after this issue of RAIL went to press).

Funded by Angel Trains, the five bi-mode units have been ordered in a £60 million deal. They will replace the four five-car Class 180 Adelantes (180109-111/113) that have been dogged by poor reliability.

“We have made a significant investment in these hi-tech trains, which will completely overhaul the current service as our customers know it,” said HT Managing Director Louise Cheeseman.

“This is not just a fleet rollout, but our contribution to the economic regeneration of the area. We are the only operator to carry the name of the city it serves, and we are determined to make the city and its people proud.”

First Rail Managing Director Steve Montgomery said: “This investment in five brand new trains demonstrates FirstGroup’s commitment to Hull and our Hull Trains service. We’re proud to have supported the local community and East Yorkshire’s economy by investing in Hull Trains and growing the service over the years.”