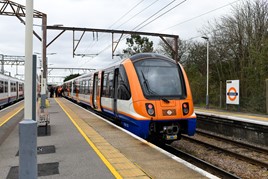 Bombardier Class 710/1s have finally entered traffic on London Overground services from Liverpool Street, more than 14 months after the entire 31-strong fleet should have been in traffic.

A pair entered traffic on February 24 on the Enfield Town route, but were taken out of traffic. The official launch was on March 3, and they will replace the veteran Class 315s.

The delay was caused by a software issue that prevented the four-car electric multiple units from running in multiple. They are to run in pairs and will offer 10% more capacity. The AC-only Class 710/1s entered traffic on the Gospel Oak-Barking route to release dual-voltage 710/2s for the Watford Junction-London Euston services. The dual-voltage trains were also 14 months late into traffic.

LO expects all its Class 710s in traffic by the end of June, 19 months later than planned. “These new state-of-the-art trains will improve reliability, boost capacity and deliver a range of additional benefits to passengers including free Wi-Fi and real-time information screens,” said London Deputy Mayor for Transport Heidi Alexander.