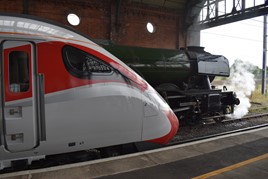 Ahead of the launch of Anglo-Scottish Azuma services from August 1, LNER 800113 became the first of the Hitachi-built trains to carry passengers north of York, when it operated a VIP special to Darlington on July 30.

The nine-car bi-mode Class 800/1 left York at 1058, after a ceremony that included posing record-setting ‘A4’ steam locomotive 4468 Mallard alongside the Azuma.

“Azuma is a great example of how we are transforming rail travel, much in the same way our predecessors have done whether that be through the likes of the ‘A4s’, ‘Deltics’, High Speed Trains or Class 91s. They’ve all been great trains that have served LNER customers well over the years, and Azuma now continues that proud tradition of setting new standards in rail travel.”

The operator will introduce the ‘800s’ on its Anglo-Scottish services beginning on August 1, when they operate the ‘Flying Scotsman’ service, leaving Edinburgh Waverley at 0540 and returning north at 1730.

Azumas began operating on the London-Leeds route from May 15.