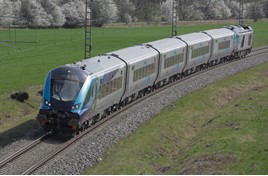 The first Class 68/Mk 5A trains for TransPennine Express will enter traffic this autumn, the operator confirmed on April 12.

TPE unveiled the first set of five coaches at the Velim test track in the Czech Republic. Invited guests were able to sample the interiors of the CAF-built stock, and it will be this set that arrives first in the UK.

CAF designed the stock in Zaragoza, with the Driving Trailer Standard (DTS) coaches built in Irun and the Trailer First and Trailer Standards in Beasain (both in northern Spain).

CAF is building 66 coaches that will be formed into 13 rakes of five plus a spare Driving Trailer (DT). TPE will operate 12 diagrams per day with one spare set. Goodwin said TPE has recruited an additional 70 drivers and conductors to operate the new fleet.

These, and the 75 Mk 5s being built for Caledonian Sleeper, are the first locomotive-hauled coaching stock (LHCS) built for the UK since Nightstar in 1992, for the ill-fated Channel Tunnel Sleeper trains. They are the first LHCS to enter passenger service in the UK since the Mk 4 sets.

TPE was precluded from ordering diesel multiple units during franchise bidding, as the belief was that these routes would be electrified.

On the interiors, TPE Head of New Trains Robin Davis said the specification is for InterCity standards, although there is also an appreciation that commuters and airport users will also use the trains.