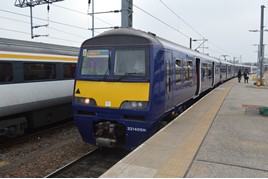 Alstom is targeting 2021-22 for its first hydrogen-powered trains to enter revenue-earning service in the UK.

It follows the company’s announcement in May that it would work with Eversholt Rail to convert Class 321 electric multiple units to hydrogen operation by fitting on-board tanks for the gas, which when combined with oxygen can produce an electric current to charge fuel cells for traction (RAIL 853).

If successful, the trains would enter service in the UK at roughly the same time as in Germany, where Alstom has a contract to deliver 14 hydrogen-powered Coradia iLint trains to the Local Transport Authority of Lower Saxony by December 2021 (RAIL 840).

Eversholt Rail owns 101 four-car Class 321s that are currently operated by Greater Anglia and a further three four-car units operated by Northern. All are due to go off-lease by the end of 2019.

Alstom’s head of business development Mike Muldoon was unable to confirm to RAIL how many ‘321s’ would be converted, because of the commercial sensitivity of its ongoing discussions with a number of UK operators.

He told RAIL: “The ‘321’ fleet is fairly numerous, which fits with our objective of achieving multiple deployments. We are looking to secure a large fleet deployment, not just one or two trains, and are working with a number of operators."