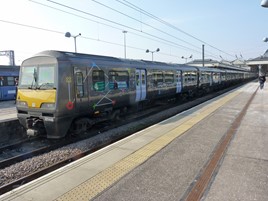 Alstom has confirmed that it is working with Eversholt Rail to create the UK’s first hydrogen-powered main line train.

The company plans to convert Class 321 electric multiple units to hydrogen operation by fitting on-board tanks for the gas, which when combined with oxygen can produce an electrical current to charge fuel cells for traction.

According to Alstom, the only other bi-products of the process are water and steam, making its hydrogen technology a zero-carbon emission and much quieter alternative to diesel-powered trains.

It will also be marketed to prospective operators as a way to achieve the environmental benefits of further electrification of the UK network without the associated disruption and capital expenditure.

There are currently 101 four-car Class 321s operated by Greater Anglia and a further three four-car units operated by Northern. All are due to go off-lease by the end of 2019 - neither Alstom nor Eversholt Rail would confirm how many would be converted.

In September 2016, Alstom became the first company to introduce a regional hydrogen-powered train when it launched the Coradia iLint at the biennial Innotrans exhibition in Berlin (RAIL 810).