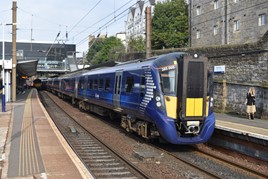 Speaking in the Scottish Parliament, Matheson said that the current deal (due to finish in March 2025) requires ministers and Abellio to revisit the level of government subsidy for the remaining five years of the contract, and to determine whether additional money should be paid. This process is known as rebasing.

Ministers have decided that the significant increase of government subsidy required would not secure delivery of commensurate benefits to passengers, communities and the economy. A No Rebasing Notice was therefore issued with existing government subsidy levels remaining in place, and with the franchise ending early.

“Ministers must ensure that the services we secure are high-performing, financially sustainable and offer value for money,” said Matheson.

“Of course, the Scottish Government must plan for the future of our rail services beyond 2022. Work is already under way to examine the options open to us in this regard.”

Abellio UK Managing Director Dominic Booth said: “We are hugely disappointed by this decision and believe it’s the wrong choice for Scotland’s Railway and its customers."

He said Abellio would remain fully committed to the service until the end of the franchise.