A ‘labour of love’ as illustrated history of HMRI launches 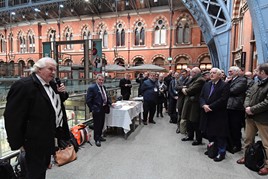 A major new history of Her Majesty’s Railway Inspectorate (HMRI) was launched at St Pancras on December 3.

A New Illustrated History of Her Majesty’s Railway Inspectorate from 1840 includes more than 280 photographs, illustrations, graphics and trackplans - many of which have never been published before.

The book builds on a previous volume produced by Stan Hall in 1990, which was the same year in which the Inspectorate became part of the Health and Safety Executive. The HSE has subsequently been transferred to the Office of Rail and Road (ORR).

Co-author David Keay said at the book’s launch event: “From the late 1990s to the early 2000s we saw some horrific accidents that were possibly worse in their effect on the railways than the ones that came before it. They needed recording because if you forget history it tends to repeat itself.

“Many of the photographs have not been seen before. Hopefully we have something here that will inspire people that working on the railways and for HMRI is a good job.”

Nigel Harris added: “This book is tangible proof of my favourite saying that ‘those who ignore the lessons of history are doomed to repeat them’.

“On a railway which is characterised by lots of new companies, I think it’s really great that we have an organisation like HMRI which is the second oldest we have , and which will be celebrating its 180th anniversary next year.”

Mick Whelan, general secretary of the ASLEF union, was also in attendance. “I think we must always revisit the past to protect the future, and this book objectively does that by showing lessons learned and the evolving nature of the HMRI, from the very inception of our railways,” he said.

■ For an EXCLUSIVE feature drawing on Nigel Harris’ Introduction to A New History of Her Majesty’s Railway Inspectorate from 1840, read RAIL 894, out now.