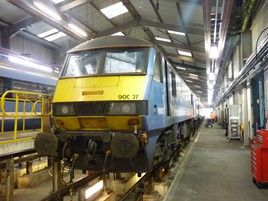 Work has begun on a £40 million upgrade of Norwich Crown Point depot, ahead of the introduction of new trains.

Greater Anglia has leased a depot at Colchester from Balfour Beatty, to cover for the disruption at its Norfolk site.

However, the company has said that no decision has yet been made regarding the proposed new maintenance facility at Brantham (near Manningtree), which was due to open in December but where construction work has been paused for several months.

Under plans to introduce 1,043 new vehicles for GA, Crown Point needs upgrading to stable and maintain 58 trains being built by Stadler.

Because the trains are low-floored vehicles, most components are on the roofs and so high walkways are being installed.

GA Franchise & Programmes Director Mike Kean said: “We’re committed to the region we serve and playing our part in supporting its development, so we’re very pleased to be able to create a new centre of excellence for train maintenance in East Anglia, in partnership with Stadler.”