250 staff to be employed at new £80m Doncaster depot 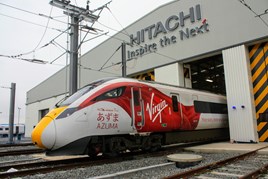 A new team is being hired to maintain two fleets that will be based at the £80 million South Yorkshire facility, which has been constructed on the site of the former Doncaster Carr locomotive depot.

Hitachi Rail Europe (HRE) has so far recruited 60 staff members for the depot, and says the next round of recruitment is under way. It aims to recruit local engineers with experience in mechanical and/or electrical work. Apprentices are also wanted, ready to start this September.

Sixty-five Virgin Trains East Coast Class 800/801 Intercity Express Programme (IEP) and 19 TransPennine Express Class 802 AT300 trains will be based at the depot.

Currently the site is home to two five-car VTEC Class 801s built by HRE and which are soon to begin testing on the East Coast Main Line. The site is also used for testing and commissioning IEP trains released from Newton Aycliffe prior to entering traffic.

Geoff Elliott, General Manager for East Coast maintenance, said: “Doncaster is the perfect location for bringing new talent and skills into the rail industry. The local area has a strong legacy of technical and engineering jobs, and our depot investment looks set to cement this reputation.”

The depot’s total size is 11,000m2. Its main shed has five roads, and up to 24 five-car trains can be stabled at the depot. There is also a wheel lathe and separate train wash facility at the site.