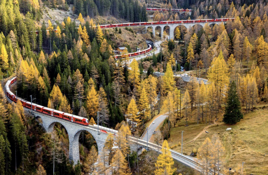 Despite a delay caused by a faulty camera link at the front of the train, the run passed without a hitch. It was witnessed by thousands gathered along the route or cycling alongside.

Following part of the route taken by the world-famous ‘Glacier Express’, the world record attempt took in the spectacular Landwasser Viaduct and the extraordinary spirals that secured the line’s international heritage status. In less than 25km (15½ miles), the train plummeted nearly 800 metres in altitude from 1,788 metres above sea level at Preda to 999.3m at Alvaneu.

The event was staged to showcase the RhB to a worldwide audience and attract visitors back to the region after the COVID-19 pandemic. Technical support and sponsorship was provided by Stadler, Siemens and ABB.